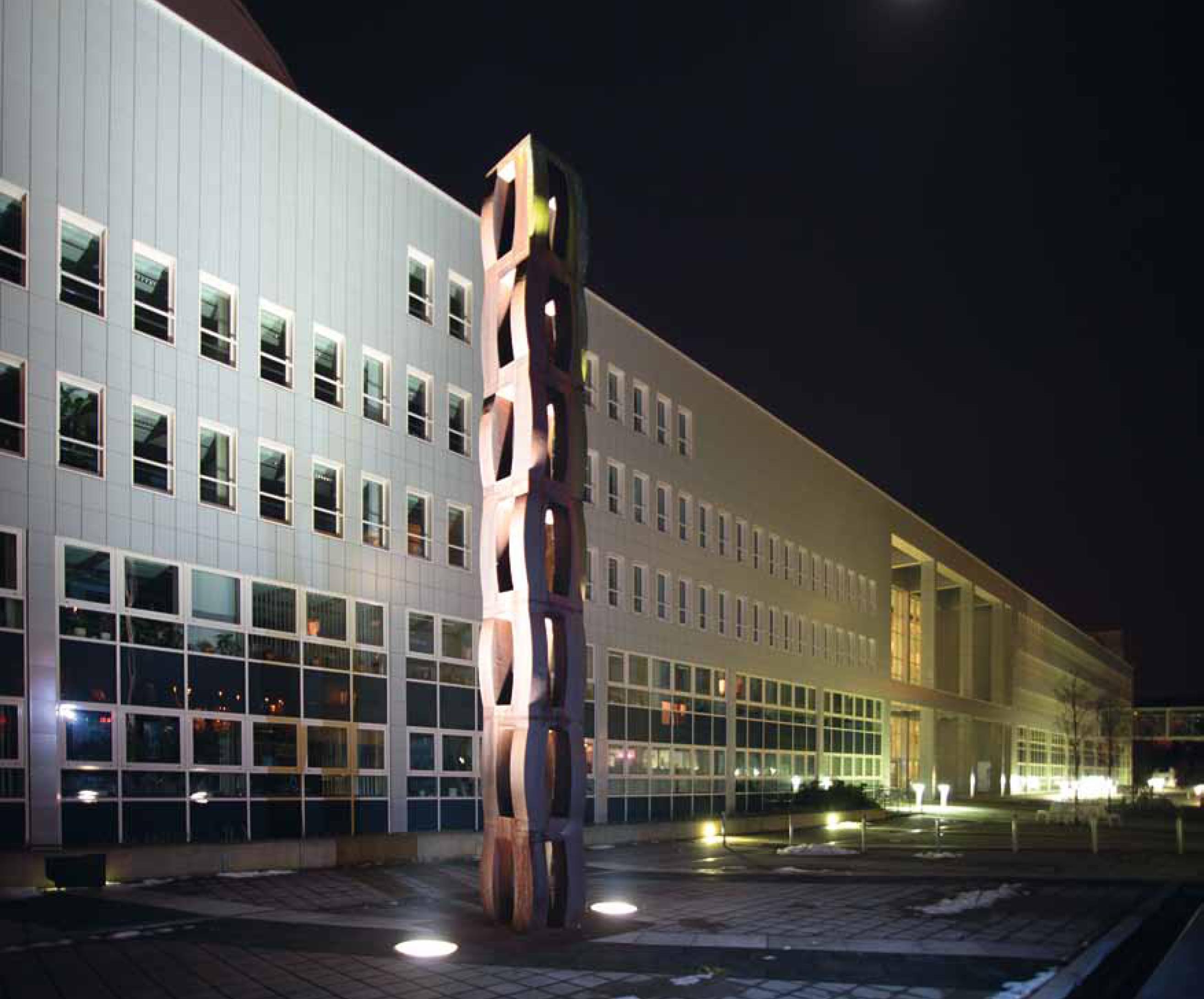 The Romanian artist Peter Jacobi was born in 1935, and graduated from the Fine Arts Institute of Bucharest in 1961. He lived in Romania until 1970, at which point he established himself in Germany, the country where his artistic vocation has since been developing in various forms: he is a modern sculptor and photographer, concerned primarily with new media and new materials.

Until 1970, he and his wife, Ritzi Jacobi, displayed abroad at the International Tapestry Biennial from Lausanne (1969) and the Biennial from Venice (1970). After 1971, he held conferences and workshops in the United States, England and Australia. In 1974, Peter Jacobi was awarded the Lewis Comfort Tiffany Foundation Award in New York.

After 1990, the artist was present in Romania again with exhibitions opening in the main cities of Transylvania: Timisoara, Cluj-Napoca, Sibiu, and Brasov.

On the 10th of May, 2002, the Romanian public was invited to meet Peter Jacobi's most recent works at The Romanian National Museum of Art from Bucharest (located at Stirbei Voda Street, No.1, right in the middle of the city).

This new display is an ample retrospective exhibition, containing sculptures and photographs created between 1972 and1992 and using some of the newest techniques and media. The title of the exhibition, which remained open until June 14th, is Palimpsest, the Greek word for writing-material or manuscript on which the original writing has been effaced to make room for a second writing.

As a sculptor, Peter Jacobi chooses geometric forms, exploiting their simplicity and purity. Other influences, originating from both the modern and contemporary art trends, come together in Jacobi's sculptures: conceptual and minimal art, and both construction and deconstruction used as a new interpretation of old forms. Unlike Brâncusi's columns, which influence a cycle of vertical, modular sculptures made from bronze, steel or stone, Jacobi exploits the expressive qualities of any material. His columns are elaborate constructions, based on solid geometric principles.

Like Brâncusi, Jacobi is interested in the simplification of a traditional form which carries a deeper meaning. The column is an axis mundi, or a center that joins Heaven and Earth.

Another cycle of Jacobi's sculptures consists of memorial pavilions, or circular works made from wood, bronze, gypsum or cardboard, and dedicated to people or events from the past. This kind of work tries, in its simplicity, to become an alternative to the public forum monuments, especially because so many of the classic monuments are overly grandiloquent. The column is the geometric principle of Jacobi's memorials, as well.

The horizontal compositions, made from welded steel, stone, wood, black granite, or marble, are the simplest of Jacobi's forms. The influences of minimalism are clearly present in these pieces. Works from each of these cycles may be seen at the Romanian National Museum of Art. The curators of the retrospective exhibition made a representative selection of Jacobi's works.

Another important part of this contemporary artist's work consists of photographs divided into cycles, much like his sculptures. A lot of these photos are in fact photomontages that incorporate use computer editing techniques. The idea upon which these works are based is a "circulation of values from past to present and from present to past," says Bernd Scheffer, Professor of Literary and Media Studies at the University of Munich. The main subject of Jacobi's art is Time: both its traces and its effects. Therefore, the main message of his work is simple: we need to retrieve the values of the past.

A cycle of his photomontages, entitled The Beautiful Ladies of Times Goes by, uses historical photos, from the 1900s and the beginning of the 20th century on which the author intervenes with paintings or special digital effects. The Beautiful Ladies are either anonymous characters or, on the contrary, Mary, the Queen of Romania, as well as the princess Elisabeth of Romania, dressed in traditional costumes, because at the beginning of the century, rich ladies used to wear Romanian traditional clothes.

Another cycle of photomontages uses the photos of famous artists' graves: Cioran (the Romanian writer who died at Paris), Enescu (our famous composer), Tristan Tzara (the founder of dadaism), Eliade, Brâncusi, and many others. All these works pay homage to the Romanian artists who contributed to the development of our modern culture. The title of this cycle is East-West.

A third cycle of photomontages uses the photos made by Jacobi in Germany, where he has discovered dramatic traces of World War II: bunkers and anti-tank barricades. All of these traces look like an installation in Jacobi's photomontages. They are important documents, a social memento that prevents us from forgetting.

Peter Jacobi offers us a complex work, full of meaning and feeling, and invites the public to enjoy his constructions, while also including them in the patrimony of contemporary values. Jacobi's presence in Romania is a significant cultural event.